History of the Preserve

Action initiated in April 1995 by residents and Town Council members created a Task Force of 11 members representing a broad base of citizen participation. In ensuing months this group defined and prioritized the desirable areas within Section 6, 7, and 17. They outlined a strategy for acquisition and recommended the Town Council establish a McDowell Mountain Commission.

In February 1996, the Council named 7 residents as members of that Commission. Within a year the Commission asked the Council to call for voter approval of up to $10M in General Obligation Bonds for the purpose of purchasing land in the priority areas. Politically, the sitting Town Council chose to call for approval of $6M of G.O. bonds since that would not significantly increase taxpayer debt due to expiration of an existing road improvement bond. 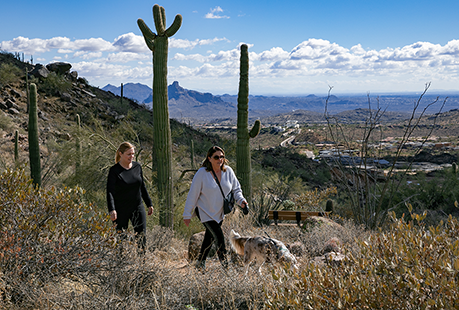 In November 1997, 64% of voters supported the use of $6M of General Purpose Bonds. By April 1998 a committee including representation from Town Engineering staff, Planning Director, Mountain Commission, and 3 persons from MCO Properties had evolved a plan that would buy 300 acres of mountain land for $6M ($20,000/acre). In exchange, the developer requested rezoning Section 6 from R1-43 to R1-35. The plan was defeated due to local residential threats of a delaying action through a referendum proposal.

In 1999 the Town Council proclaimed 386 acres (previously acquired in a settlement agreement and a land trade) as Fountain Hills McDowell Mountain Preserve. However, this also led to another major issue in ongoing negotiation with MCO Properties for an additional 452 acres of land. The earlier land packages designated as Preserve were divided by an 18 acre section that comprised the “saddle” between Sections 6 and 7. The Town wanted to acquire that land to unite their preserve holdings as a contiguous, undivided land mass.

Negotiations were slow, and land values had risen to a level that would require more money that the $6M from bonds. In October 2000 the Town Council approved an increase in Sales Tax revenue of 0.04%. Of that income, 75% would be designated specifically for mountain land use and 25% would be used to build a fund for downtown development.

In December 2001, after a settlement agreement with MCO Properties, the Town acquired an additional 354 acres for $13.6 million ($38,418/acre). Thus the Preserve area grew to a total of 740 acres. Additionally, Scottsdale had extended their Sonoran Preserve holdings to include 200 acres that lie within the borders of the Town of Fountain Hills. So the Preserve now covers 824 acres extending from the southern mountains in Scottsdale to the Maricopa County Park border to the North."

By direction from the Town Council, the McDowell Mountain Preservation Commission is responsible for initiating the planning and providing management direction for operation and protection of the preserve.